Happy Friday!  We made it to the weekend.  Woooo!  And I’ve finished my Nephew’s Christmas sweater!  As promised, pics in front of the Christmas tree!

I hope you didn’t expect the toddler, the sweater and the tree all in the same picture. LOLOLOLOL.  Yeah.  That has not gone according to plan.  There’s still plenty of time though. It’s a process.  Everything is a process with a toddler.  It’s one thing to know that but this week, I’m understanding it on a much different level.  He’s a handful!  When the perfect picture finally happens, it’s going to be a grand triumph!

I think he likes his new sweater though.  (Not nearly as much as he loves Bounce Patrol.) He happily wore it through several watchings of Old MacDonald, Wheels on the Bus and Baby Shark.  That’s really all I wanted.

I’m happy with it overall.  It looks cute and there’s enough room to grow that it will fit through the winter and into the spring.  Of course, I’d change some things about it too.  I already modified the collar, the colorwork and the seaming.  (The mods I outlined earlier in the week.)

Then there’s the changes I didn’t make but should have. I had a moment of ‘I know better than the designer’ but I followed the pattern anyhow. 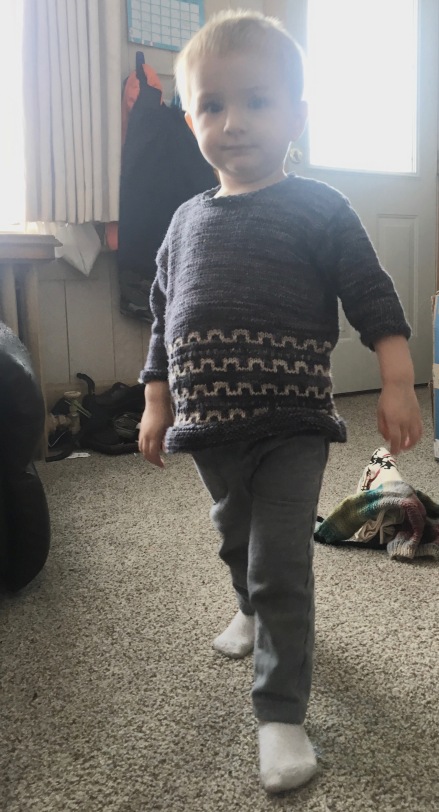 The garter band around the bottom…it’s too wide so it flares.  This is a known issue.  Garter stitch will always be wider than stockinette stitch.  I know this.  Elizabeth Zimmerman knew this.  Her solution, the one I prefer as an EZ fan, is to decrease the stitch count of the garter section 10-15%.  Alternatively, you could increase the stockinette stitch count by the same 10-15%.  Either way works, I’ve done it in the past.  12% Is my magic number for this.

Some people use a change in needle size to accomplish the same end result.  Narrowing the garter band so it’s in line with the stockinette body, thus eliminating the flare.  It’s a minor problem, all things considered but I’m kicking myself a little bit anyhow. 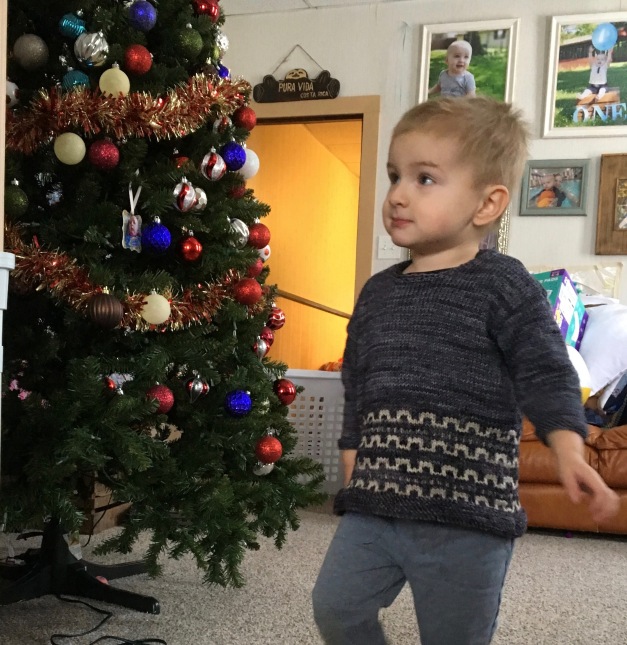 Now to start designing his next sweater!  Maybe something with a dinosaur…