One of the things I liked most about the San Francisco version of Vogue Knitting Live was getting to do everything.  The small size of the event meant I had time to do all the things…shopping and classes, yes but also stop at the measurement station, the line wasn’t a mile long.   Catch a couple fashion shows, because they were in the same ballroom as the marketplace.   Stroll the Rowan 40th anniversary collection that was being displayed and get up close and personal with original pattern samples!

Vogue had Josh Bennett’s Marvel collection on display as well as the cover sweaters from the current fall issue and a sneak peek at the brioche collection that’s going to be featured in the next issue!  The next issue could be good! 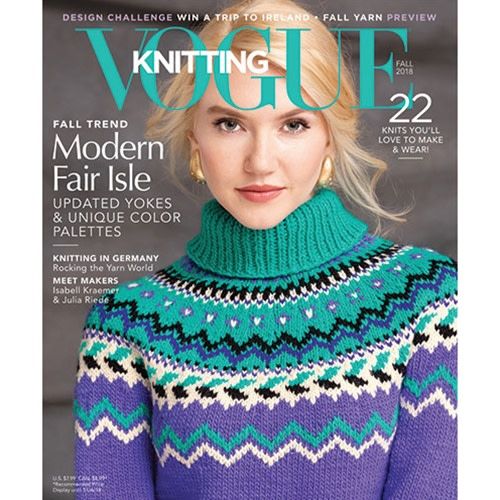 I’m no traditionalist and you may have noticed how much I enjoy color.  This cover just really grates on me.  I complained to everyone who would listen.  At the Vogue publishing booth, I told the woman.  She said ‘would you rather have the European cover?  We have it and the content is the same, just a different cover?’  Of course…it was still pastel.   No!

This particular cover choice has irked me since it was released.  It had not occurred to me, I’d get to see the actual sweater in person!  There it was waiting for us, right at the top of escalator into the marketplace, along with the rest of the yoke sweaters from the same issue. 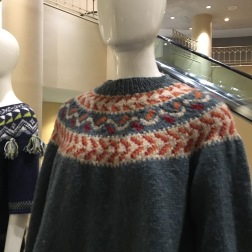 I’m not saying it’s a bad sweater.  Not at all, it’s a lovely sweater, just not the cover sweater.  Especially when the rest of the collection is perfect for fall!  Of course, hotel lighting was awful, so click here if you want to see how beautiful these sweaters are.  The bottom right sweater is a lovely soft turquoise color with rust and burgundy accents in the yoke.   That is a redhead’s dream!  And a perfect choice for the cover…what were they thinking?

The cover is nearly forgivable though.  Maybe they were trying to think outside the box or be fashion forward or some shit like that.  Fine, the actual garments are great.  Let’s not throw the baby out with the bathwater.

The same can’t be said for their next choice. 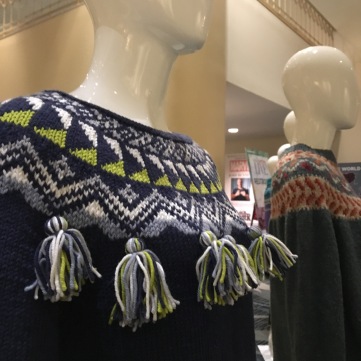 BOOB TASSELS??  WTF?  I mean, seriously?  How did any fashion editor,  anywhere, think this was a good idea?  NO.  That’s a lovely sweater that has been turned into an abomination.  I still can’t really process what is going on here.  The number of hands this had to pass through to become part of the magazine and no one thought to question it?  Or perhaps feature the sweater without ridiculous boob tassels.

Maybe it’s all a setup.  They’re prepping us for boob fringe, which will seem rather normal by comparison?  There’s really no good explanation for it.

The brioche sneak peek from the winter issue is much better.  Nothing completely ridiculous or rant-worthy, except maybe poor lighting. 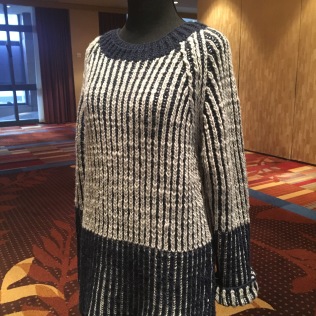 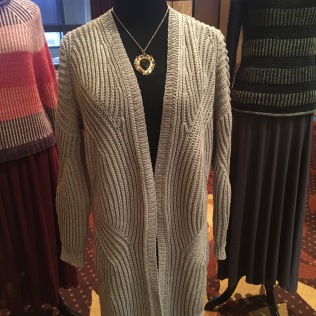 Two raglans, a cardigan, a yoke sweater and a wrap, all in brioche.  I think this issue will be popular.  I see potential for wearable garments, in lots of colors, at a range of skill levels.   Let’s hope they don’t fuck up the cover!

Josh Bennett’s Marvel collection, I think these sweaters have been at a lot of Vogue events already but I really liked getting to see them!

Writing knitwear patterns for men’s garments is a thankless job.  I don’t think we’ll ever see patterns for these sweaters but they are terrific garments.   They were designed as part of a hand knit collection that retails for about $1300.  Honestly, that’s a great price for a hand knit sweater.  I would charge you more.  :)

The was one more set of sweaters on display, a collection celebrating Rowan’s 40th anniversary.  This gown was gorgeous!  Knit from Kidsilk Haze and adorned with Swarovski crystals…oh la la!  They even sent it down the catwalk during the fashion show.  It was great to see it on a person!

And, of course, there were plenty of samples on the marketplace floor to be inspected as well.  I really liked this cashmere cardigan, probably the zipper that sucked me in. 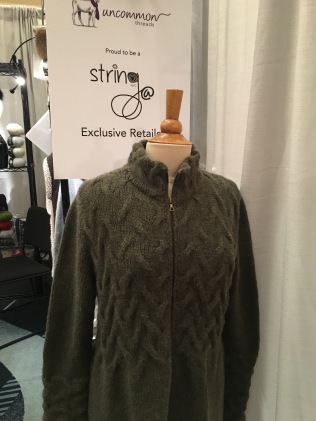 The collar was folded over, sandwiching the top of the zipper.  Interesting way to almost do an encased zipper while giving the collar enough bulk to stand up.

Maybe a design feature for my next cardigan?  There’s certainly a wealth of options here to think about!  Seeing all these garments in person is great inspiration, even when it’s inspiration about what I don’t want! The results of failed experiments should never be underestimated!