Next week, I’m going to Vegas.  The trip was planned earlier in the year to coincide with some 40th birthdays and a music festival.   My funemployment status made the choice to drive a no brainer.  It, also, meant I didn’t have to make any real decisions yet.

A few weeks later, it was discovered that an east coast friend will be arriving in Vegas for a conference, just as the music festival friends are leaving.  Of course, I’ll extend my trip a few days.   I was so happy I hadn’t done something set in stone, like buy a plane ticket!

I was thinking of taking the long way home anyhow.  Then this week, a little seed got planted into my brain.  Roswell.

I mean, why not?  I missed it the last time I drove cross-country.   It’s an awful long way to drive for a bit of novelty.  I’m not a serious tinfoil type but I’ll be back to work soon enough, might as well have a little fun.

With that in mind, I pinged a friend in Dallas because, relatively speaking…I’ll be close.  Much to my surprise, the answer I got was a weekend tailor made for me.  My favorite band, that isn’t part of the festival in Vegas, will be in Dallas. 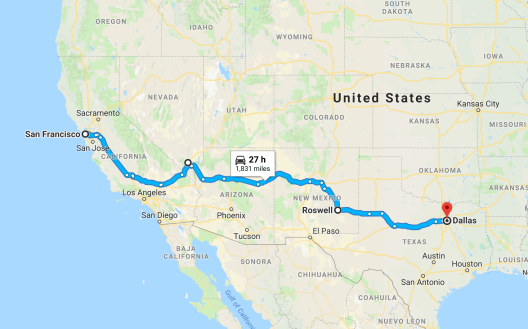 I have started doing some research though.  I’ve found a brand new and seemingly great yarn shop in Bakersfield to visit and of course, there’s Sin City Yarns to visit in Vegas.  I’ve found some ghost towns and state parks.  I’ve located the section of Route 66 that plays America the Beautiful in New Mexico.  So I’ve got some options!

I need your suggestions though, anybody have a not to be missed yarn shop?  I’m not at all committed to that blue line that google drew so feel free to suggest anything southwesty!  Sedona, Flagstaff and Albuquerque are all possibilities.   Breaking Bad tour of ABQ?  Might need to research that one!

I leave Tuesday, and it seems like this may turn into a 3 week excursion!  Yarn shops, roadside attractions, great eats, scenic pieces of road…I’m open to all of your suggestions!  Let me have ’em…

Cross Stitch, not just for stopping cocaine use in bathrooms! Now it can also help you remember how to graft those stupid I-cord ends together!
#MeMadeMay…coming in just under the wire. I make things, I never leave the house without a piece of knitwear. Sometimes I take pics of it.
Friday flowers!! The Rose Garden is looking amazing right now. Here’s a few pics just in case you can’t make it over there…
Dear @willowpillqueen, please hate me! You’re the best! 👑😍🤣,
Happy 4/20! This month’s shop update is live, celebrating the stoner life!
WestKnits in the wild! Took my Painting Waves for a walk. Didn’t mean to take so pictures but it’s irresistible.