A Parade of Hats

Anybody else tune in for the Olympic opening ceremony last night?   They say Parade of Nations.  I say Parade of Hats.  (this post is pic heavy so may take a bit longer to load!)

There were some winners.  Mostly, though, they played it safe.  Lots of bland.  I’ll skip over the bland and just get right to the highlights.

Or, is that highlighters?  Kudos to Hungary and Slovenia!  I like their bold use of color!  Slovenia has a nice texture too!  I like texture.  Might as well have a bit of fun with it.

Finland gets points for color and patterning too!  It’s not knit though, so not as exciting to me. Croatia and Latvia both had striking red designs.  The Latvian hat is probably the one knitter’s will want to make most.

The Latvian design in 2014 at Sochi was also a knitter’s favorite.  No surprise given the well known history of Latvian knitting!  It was a black and white hat, highly patterned.  The patterning was of the pictorial variety with symbols taken from a historic Latvian town, where all the buildings were patterned in a similar way.  I have some very specific images in my head and yet, google has failed to produce any evidence, that what I speak of is based in reality.

At any rate, in my mind, Latvia is the reigning two-time Parade of Hats gold medal holder.  They hit all the right notes, classic but modern. Striking but wearable.  And, knitter’s want to make it.  Well done, Latvia!

There were lots of other nice hats.  Knitters have made and will continue to make these hats for years to come. 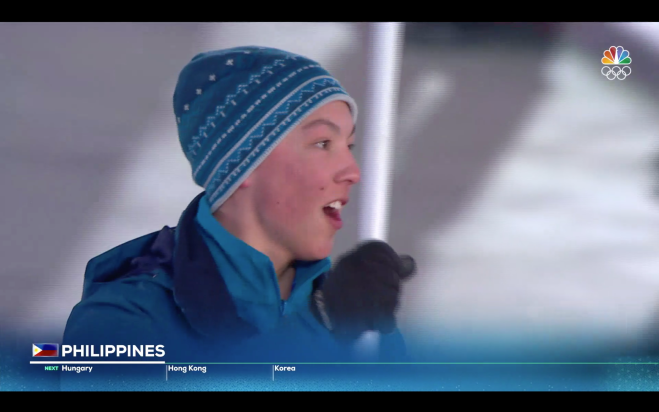 I think the Gap has made most of these hats too.   So, ya know, not exactly my wheel house.  If I want interesting and unique designs and if I want to see handmade, I’ve got to turn to the spectators.

I did find one good crowd though!  The girl in the front is wearing an interesting stocking cap.  Heathered and striped and maybe even cabled? Her brother (?) has a cute hat on too.   And see the purple pom-pom behind them?  That variegated business is absolutely handmade! Very Knit Collage.  I’m really more interested in the guy next to her though…check out that jacket!

That’s the Canadian snowboarder’s jacket!  A printed version of a hand knit sweater!  So cool! Fashion and function! Well done, Burton! All of the athletes get a hand knit sweater too.  I imagine those will be saved for the apres-ski though!

Here’s a link to more photos of the sweaters and the rest of the gear from Burton.  The video with the company founder is very off-the cuff but it’s perfect.  Take note Ralph Lauren, that’s how it’s done!  They really did a great job here!  I love these jackets.

The Where’s Waldo of Knitwear is far over though.  My mission is to find this hat again… This is snowboarder Shaun White hugging family after his 2006 gold medal run and after his 2010 gold medal run.  I think the girl in the hat is his sister.  That is definitely some handmade love right there!  Shaun competed in 2014, the hat was no where in sight and he did not medal.  Coincidence??  I don’t think so.

I’d tell you about my own progress on the Hat Halfpipe but there is none.  Two runs have both ended in an Aerial Unwind.