I knit less and less for Christmas as the years go by.  While it was always hard to make it to the top of knit-worthy list, it’s become even more challenging!  Not only do you have to appreciate what I do with genuine enthusiasm but the spirits have to move me.  Still, it happens more often than planetary alignment.  There’s always hope.

I managed a few Christmas gifts this year.  It’s tough to have knitting secrets in the age of social media and Ravelry.  A good detective will find parts of this years gifts in my digital wake but still, a few surprises were had!  I’ll start with the easy one…

First is BB-8.  You saw him a few weeks back but it turns out being a knit-worthy friend does not require one to read my blog!  I don’t think he’s changed much.  I added a few details.  Now that I’ve seen the movie, I think I’d add a few more details.  And I’d make his little eye blue.  Seeing him in action gave good insight into which features read and which don’t.   When he was zipping around and engaged, his little eye turned blue.  Making it blue would set it apart from the big eye and give the details around it more depth.   I have yarn for another.  I suspect this is going to be a one-of-a-kind though. 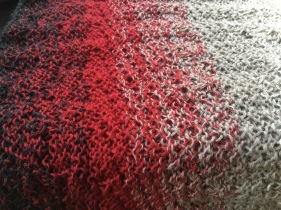 Next up, an alpaca cowl in Mom colors.  This was a travel project so you’ve seen this one before.  I tried to camouflage it.  You were supposed to be looking at the pagoda, not the knitting!

I used the sequence knitting technique for this one.  I’m still a big fan of sequence knitting.  It was super easy.  I cast on ~150 and worked K5, P3 until I ran out of yarn.  Complete no brainer.  The real star here is the yarn.

It’s from Skacel and called Concentric.  It’s a 4 ply yarn where the plies are just held together rather than plied.  The gradient effect comes from one ply changing color at a time.  4 plies of cream becomes 3 plies cream plus 1 ply of beige.  That become 2 plies of cream plus 2 plies of beige.  Etc, etc.  Super fun.

The other amazing thing about this yarn:  100% alpaca that did not shed all over my clothes!  I think alpaca is lovely but I never seek out it out.  Shedding stinks.  This yarn drew me in with it’s pretty cake.  I bought it without thinking of the consequences.  I’m happy to report…there were no consequences.  It was awesome.   And Mom liked it too. Everybody wins!

And now, for the real star of the FogKnits Christmas Collection…

Mom is always asking for hats with big flowers.  I’ve tried to be accommodating.  It’s never enough.  Way back in 2016, I starting knitting flowers, with this hat in mind.

Things were going good.  I had a biologically accurate garden developing.  I started with a California poppy, an hibiscus, a daffodil and a Calla lily.

Then came the hat base.  It’s actually from yarn Mom dyed herself.  Nothing like making your own Christmas present! 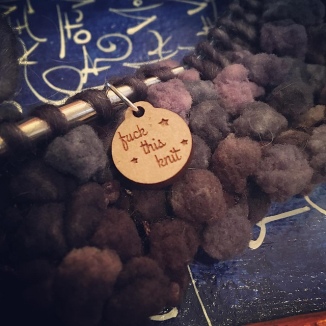 Just a plain stockinette fabric for the hat and around the bottom brim, this funny marshmallow yarn from a yarn swap.  At the time, I thought I got the white elephant but it turned out to be the perfect cobblestone path into the garden.  With those parts assembled, it was time to sew flowers.

I realized pretty quickly, I had no where near enough flowers.

I started making more.  They became less likely to be found in nature though.  A blue pansy.  a fuschia water lily.  a blue cherry blossom.  a lavender rose. 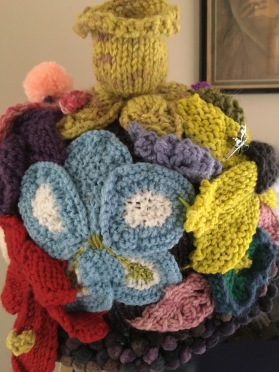 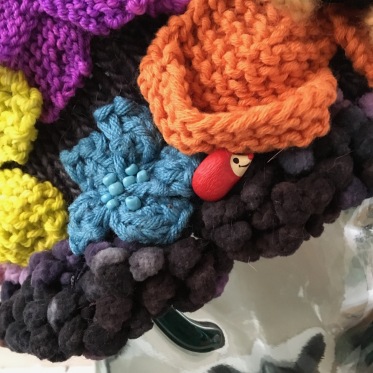 and whatever this thing is… 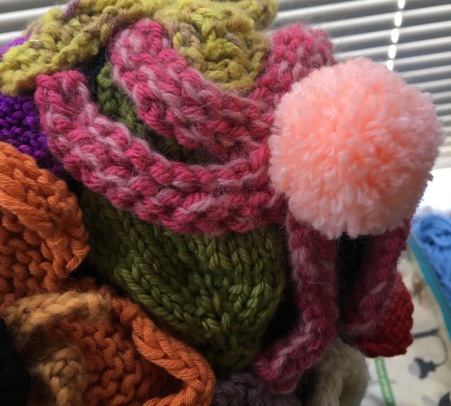 I made a few leaves and even started adding a bit of fauna to the garden…a hedgehog, a lady bug and a couple dragonflies all joined the party.

And now, Mom can never ask for another flower hat again. 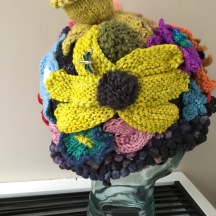 I can’t imagine why she’d need another one!  This is, without a doubt, the warmest hat I’ve ever knit.  It’s a fun blast of spring for those extra cold snow days!  Mom is happy.

Tomorrow, I’ll share the hand dyed yarn she sent to me for Christmas.  In the meantime…I’ll be knitting!  The latest sweater is on the needles!!  I’ll share pics soon!