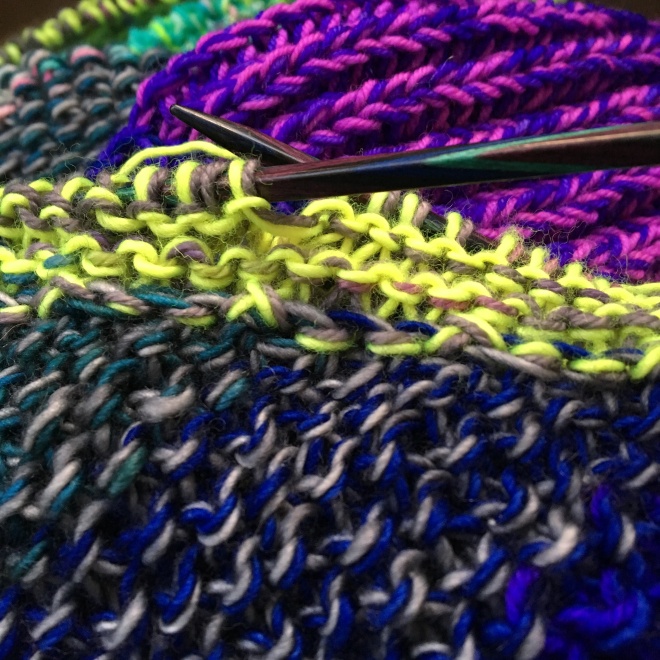 It’s been a while, life happens.  Last weekend in particular.  After doing nothing but crafting in August.  September has roared to life!  There were many parties, all with libations but only one with YARN!

My knitting group had a big yarn swap!  We’ve done small white elephant style yarn swaps in the past but frankly, I’ve got enough of my own white elephant yarn.  I don’t need anyone else’s.  And, I knit with a group that is very experienced.  More importantly, they have VERY NICE STASHES!  I wanted a piece of that action.  On the day of our last white elephant swap, I casually suggested we do a bigger, more open swap.

Apparently, they wanted a piece of MY STASH too!  In no time, we had organized ourselves a party.

This is just a sampling of what I took for swapping.   There comes a time, if it’s been in the stash untouched for years, let someone else have a crack at it!  And, if I’m being honest, I still kept the best stuff for myself.  This was only the stuff I could bare to part with.

I’m pleased to say, I came home with a lot of great stuff!  I’m impressed with what I managed to pry away from them.  I can’t wait to use it all.  So far though, I’m stuck in the chaos of it. 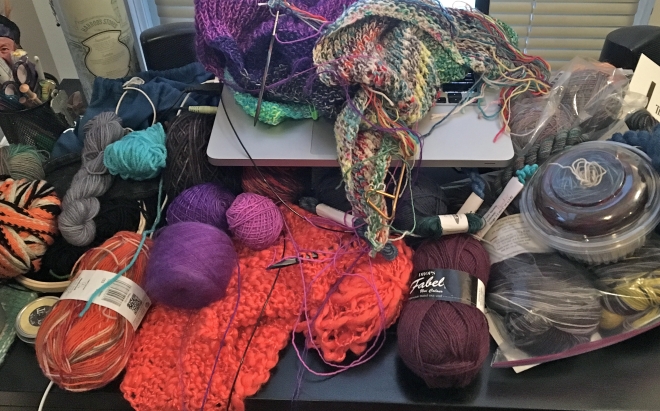 There’s a desk under there somewhere, I swear!  So what’s in this pile?  I have spent a fair amount of time putting in piles and then rearranging the piles.  And, taking pictures of piles, of course. 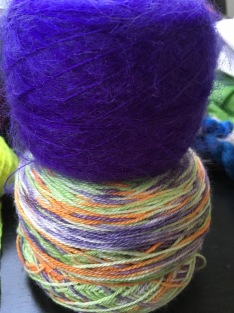 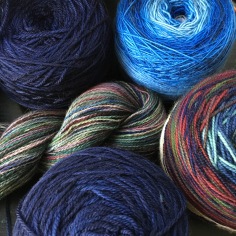 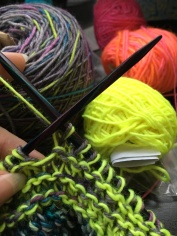 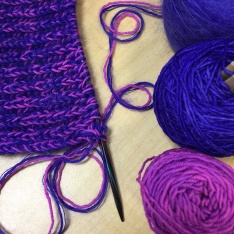 I have put two of the new yarns into my Marled Magic shawl so far.  I started with that skinny purple mohair.  It was hard to ignore that ball in the swap pile, when I had crazy purple brioche on my needles, at that exact moment.

The second yarn is a skein of MadTosh Twist Light, which I’ve never actually used before.  It’s grey and pastel variegated, so it’s perfect to tone down some of the neons I’ve got.  Right now, a highlighter yellow color, up next will be some neon peach!

I walked away from the swap with not one but TWO skeins of Caterpillar Green striping shawl skeins.  Not my favorite colors but this yarn is fun!  I think the Fade to Black color is going to become a Dotted Rays.  Not sure about the Fade to Yellow, suggestions anyone?

This beauty…a Koigu dye job on Buffalo Wool Co.’s bison and silk laceweight.  It’s 400 yards, that is something amazing and lightweight.  I almost think I should do lace?!?

And then, there’s this… 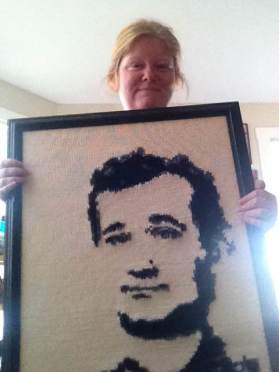 The Bill Murray Sweater really needs to happen.  I’ll never match his original dye lot, so rather than try, I’m collecting a mish-mash of white and off white yarns.  It’s going to be a simple vest I think.  It’s very much a work in progress.  Calling it a work is even a stretch.  It’s still mostly an idea but now I’ve got 7 balls of Jojoland Baritone to add to the pile.  It should be the perfect base.  I’ll fill in with my other oddments as it progresses and it’s going to be charming and perfect…eventually. (which just got a little sooner!)

And now, let the weekend begin.  First Stop:  The Knitterly in Petaluma.  It’s Friday, I’m driving by.  I should probably just buy yarn!

I’m a Star Seller on Etsy this month! That means you can purchase from my Etsy shop knowing I have a record of providing an excellent customer experience.
There’s still time to get in on the Cyber Monday sale. Link in Profile!
2022 Holiday Shopping…in full swing. Check my Profile for a shop link and too see the Highlights at a reasonable speed 🤣
Mark your calendars! Biggest sale of the year starts this week!
November Ornament Sale! 3” mini cross stitch all on sale this month!
Back in Stock! Link in profile!