It’s been one of those weeks.  Things are slightly out of whack and discombobulated.  I’ll admit, I live on the edge of chaos so it’s only takes a small step to spiral out of control.  This week has been teetering dangerously close to that line.  There’s yarn everywhere, making it virtually impossible to sit at my desk and do anything in an orderly fashion.  Project bags, empty and full, strewn about.  Patterns, books and other assorted scraps of paper have congregated into small piles, I see them conspiring to make even larger piles.

Of course, the physical things are not what’s got the week tilted.  It’s the mental chaos that’s tripping things up.  I had a clear list of what needed to get done on Monday.  It’s Thursday and nothing on the list has changed.

Today, I’m getting it under control.  I cleaned the desk up.  I put the yarn away.  I organized my needles.  It’s time to get the actual projects organized.  A little focus and a nice orderly list are just the thing!

Turns out the only thing worse than Second Sock Syndrome is Second Sweater Syndrome.  I don’t know what I was thinking.  I’d still love to wear it.  I just don’t want to knit it and life is too short to knit a lace weight sweater and not enjoy it.  Next!

Making good progress on this hat.  Although, I’ve realized, too late, I should have stuck will all lower case letters.  I decided to capitalize a few letters.  It’s turned out to be a rather uninformed decision.  The floats in this situation are prohibitively long so I’ve got to mix traditional fair isle technique with duplicate stitch.  I’m not convinced I’ll like it but there’s only one way to find out.

Despite it all, my oldest WIP has gotten some love in the last week.  It’s still going to take forever but this is one I’m committed to no matter how long it takes.  It’s going to be worth it!  The colors are amazing and it’s going to be nearly 8 feet long…rainbow scarf for days!

This is so cute!  One little sleeve left…I can finish this easily.  It’s time to clear it from the queue! 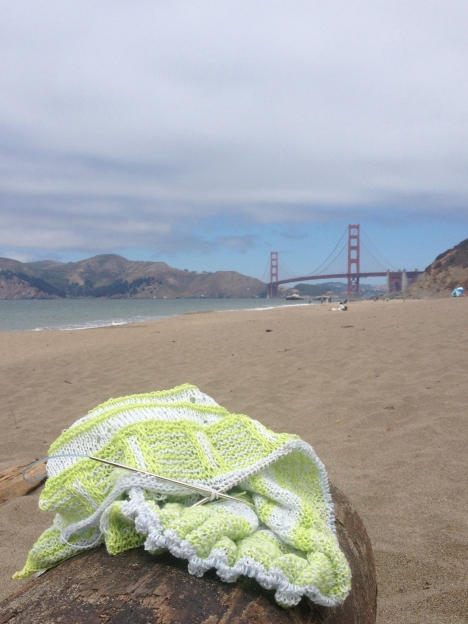 This poor shawl needs some love.  I’m making excuses to ignore it.  That trend will probably continue a while longer.  Oh well.

Seriouslielieeee? Half a hat.  And it’s been in this state for months.  There’s not a single believable excuse in this case.  I’m so close, I’ll try to finish it, I swear. 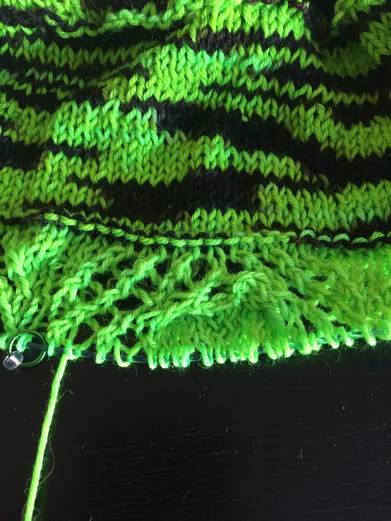 It’s neon green.  It’s October.  The pattern is cable and lace skulls.  I got the yarn at Rhinebeck last year.  Rhinebeck 2016 is only a week away.  It’s a no brainer.  Clearly I need to pick this back up!  The only problem…it’s 400 stitches of cables and lace.  Ack!  It makes 400 stitches of lace seem like a day at the beach.  I’m gonna try though!  I really want to be wearing this one while it’s seasonally appropriate!

And finally, just so I can say this was a true accounting of everything on my needles right now, a plain old stockinette hat.  I started this yesterday at an art lecture as a way to stay interested in an art lecture.  It actually turned out well.  It definitely helped me stay focused on the speaker.  The talk was interesting, a preview of the new Rama Epic exhibit at the Asian Art Museum.  I was going thinking of jazzing this up with a sea creature applique.  Maybe it should Hanuman in honor of the Ramayana!

Because clearly, I have plenty of time between now and Rhinebeck to get this all done!

And now, with all this clarity, I have no excuses!  It’s only taken until Thursday, but I think I’m ready to knit!

There’s still time to get in on the Cyber Monday sale. Link in Profile!
2022 Holiday Shopping…in full swing. Check my Profile for a shop link and too see the Highlights at a reasonable speed 🤣
Mark your calendars! Biggest sale of the year starts this week!
November Ornament Sale! 3” mini cross stitch all on sale this month!
Back in Stock! Link in profile!
Now that Ken has gone to his forever home, he deserves a wall post. I had fun sorting all his details from the heart hardware of his harness to the rivets & crystals of his skirt. A spare roll of 🧻 has never looked so good! 🤣🤣