I declared my Vivido Cardigan done on Ravelry last week!  In reality, it wasn’t finished until this week…just in time for 70 degree days!  Fortunately, I know that won’t last!  There will be a nip to the wind soon enough!

The Pattern:  Vivido Cardigan from Carol Feller of Stolen Stitches

This is my second version of this sweater.  I’m on a quest to replace my first version.  It’s my go-to, I wear it constantly.  Eventually It’ll have to be retired.  So far, I haven’t found it’s replacement.   While I am very pleased with my new purple tweed cardigan, it is VERY warm.  I don’t really get that cold.  It’s definitely not daily wear.

Modifications:  The Sleeves.   The pattern calls for only two decrease rows, in total 4 stitches decreased.  That was not nearly enough for me.  I prefer a close fitting sleeve so after following the pattern, I ripped back and added quite a few more decreases, maybe 6 more decrease rows (12 stitches).  At 3.5 st/in, that’s a significant change.

The Buttons.  The pattern calls for only one button hole at the top.  I added button holes down the entire cardigan.  I’ve settled on using only four of them, at the moment.  I may change my mind but history tells me, I’ll never use the bottom ones anyhow.

I’ve worn it out a couple times but today it’s getting a real debut!  I’ll just stick to the shady side of the street! 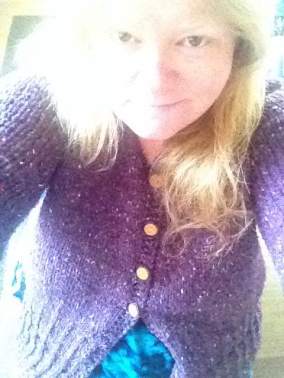